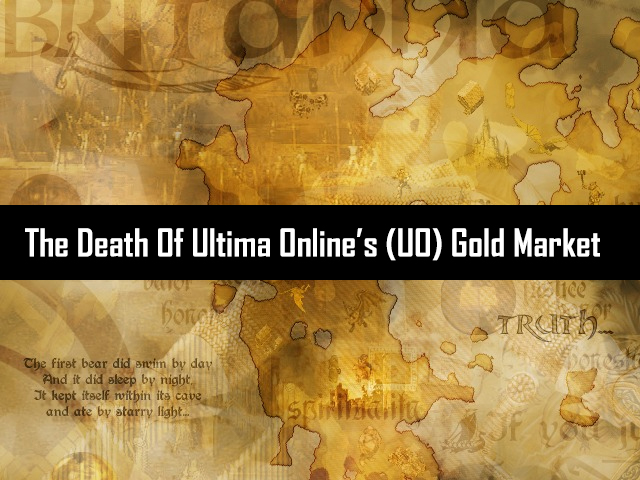 A once thriving ecosystem with scarcity around every corner, Ultima Online shined as the worlds greated mmorpg for many years. In the wake of manipulation and bad management led to a huge collapse resulting in millions of UO gold to only be worth pennies. Some might say that it's normal for the value of currency to fall over time but that's crap. The reality is that a good economy even in a video game like Ultima Online requires deflationary measures to ensure the scarcity and demand of it's gold and items.

Once upon a time a million Ultima Online gold was worth around $20 usd. Today, as it stands, a million gold is about 10 cents. One of the main reasons for this is duping, where hackers were able to create infinite amounts of gold and resulted in massive hyperinflation as the value of the curreny crashed. Items in the game are now too high in price to even put on vendors because of this blunder.

Farming UO gold has all been turned to dust, allowing only 2000-5000 gold per top monster kill. The gold is also very heavy which stops you from being able to carry much of it back home. This causes many people to just leave the gold behind instead of collecting it when a monster is killed.

Buying Ultima Online gold after the collapse did not slow down just changed. People just buy a lot more gold now for items that are hyperinflated to match. Sometimes paying as much as 770,000,000 UO gold for items that till drop off monsters. It is actually wild to see a functioning economy running in the aftermath, that is, if you consider to functioning.